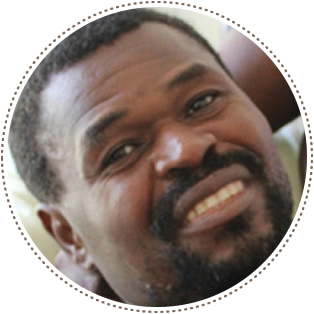 Edrisse, a proud father of three, feels fortunate to be alive right now.

“I was almost dead when I arrived at HAS,” Edrisse says.

Last year, early in the morning, Edrisse followed his usual routine of taking a motorcycle taxi to work on a winding road in central Haiti. A pick-up truck suddenly pulled out into the road and collided with the motorcycle, sending Edrisse and the driver flying through the air. Edrisse knew immediately that he was badly injured.

A friend of Edrisse’s witnessed the accident and rushed both victims to the local clinic, which transferred them to HAS by ambulance.

“My knee was ripped open, and my leg and hips were also broken. I had lost a lot of blood,” he recounts.

Our team at HAS quickly assessed Edrisse’s injuries and performed major reconstructive surgeries on his femur and pelvis.

Today Edrisse is confident that he will walk again, thanks to the care he is receiving at HAS.

“I am a farmer, and I must be able to walk in order to do my work,” he says, his eyes full with emotion. “Because of HAS, I believe I will be walking normally soon. If it weren’t for HAS, I would have died.”

Edrisse’s three school-aged daughters, Vyerlanda, Ervyann, and Afkalinda, can’t wait to see their father again. They live on the other side of the valley, several miles away, and have not been able to visit him since his accident.

“I talk with my daughters on the phone every day,” Edrisse says. “But it is not the same as being at home with them.”