Seriously injured children are brought to HAS every day. Sometimes they must journey far to reach us. That was the case for 5-year-old Lucien.

Lucien had been hit by a motorcycle and broke his thigh. The injury could not be treated at their closest hospital some 50 km away, so the family was sent to Port-au-Prince. Lucien was transported for several hours, partly on foot and partly on tap-taps (buses). The hospital and surgeons in Port au Prince demanded a fee for the operation that Lucien’s parents could not pay. So only a much too short cast was put on, which reached exactly to the level of the fracture and hurt terribly with every movement. Lucien received no painkillers. 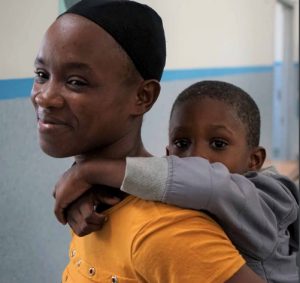 By the time the family arrived at HAS two days after the accident, Lucien was pale and was screamed loudly in pain. The boy had lost much blood because of the fracture, had not eaten anything and was very weak. After appropriate pain treatment, the surgical team was gathered, and the surgery performed that very evening.  Soon Lucien had color in his cheeks again, smiled at us and drove around the room in his wheelchair.

These are the miracles you make possible with every gift to HAS.