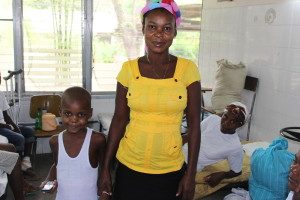 The Haitian proverb, Fanm se poto mitan fanmiy lan, celebrates women as the pillars of Haitian families. This is apparent in the hallways and wards of HAS, where women are often the primary caregivers for their sick loved ones. Many of these women are mothers, who remain permanent fixtures at their children’s side in the malnutrition, pediatric, or surgical wards.

Recently, Myrlande and her son Hans came to HAS when Hans came down with a fever and began complaining of stomach pain.  Dr. Maurice Toussaint, HAS Chief of Pediatrics, diagnosed Hans with typhoid fever, already a dangerous condition. When a routine x-ray revealed an intestinal perforation as well, Dr. Toussaint scheduled him for surgery the following day. Hans needed immediate care or he would die.

Hans and his mom were in the hospital for one month and seventeen days, as Hans required careful monitoring and ultimately – due to the severity of his condition – a second surgery before he could go home.

Myrlande is exemplary of the Haitian proverb. It was rare to see Hans without his mother who was either in a chair next to her son’s bed or curled up alongside him; in fact, throughout their entire stay, practically the only time she left his side was to buy food from the marketplace outside the hospital. 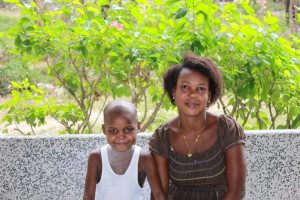 Once he was well enough to walk, Hans took to accompanying his favorite staff members around the hospital. He was full of curiosity and questions about how things worked at HAS, and to see him with his mother, it was apparent that she played no small role in fostering this desire to learn. She always had a kind smile and soft words of encouragement for his questions, despite their trying situation.

Where many might remember such a long hospital stay as a difficult or unpleasant time, Hans and his mother have taken something much more positive from their experience; before Myrlande could finally take him home healthy to his siblings and father, Hans made sure to let his new friends at HAS know that he now wants to be a doctor when he grows up.

In celebration of Mother’s Day, HAS would like to honor the love and dedication of mothers like Myrlande, pillars – poto mitans – in both their families and the hospital.