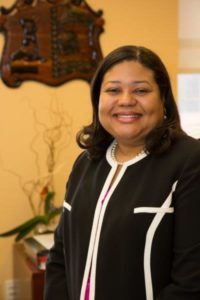 Marlyn Delva, Ed.D, is the Associate Dean of Education and Student Affairs, Dean of Students at Columbia University’s Mailman School of Public Health. Dr. Delva has been a member of the HAS Board of Directors since 2016. As a Haitian-American, she lends a particularly valuable perspective to HAS. She talks with great pride about being involved in an organization that is “advancing the Haitian economy as well as the Haitian people.”

We sat down with her recently to talk about her Haitian heritage, the role of public health, what she feels is special about HAS, and why Haiti is a country that should not be pitied. What follows are quotes that we especially loved from our interview.

“My parents were born and raised in Haiti and came to this country for better opportunity as many immigrants do. Haiti’s culture, beliefs, values and richness remained with our family. My father raised us to be fluent in Kreyol – and whenever we responded to him in English, he made sure he responded to us in Kreyol because he believed in ensuring that we were connected to the culture. Ironically, with my children I have done very much the same. My son has his Haitian flag in his room. My kids feel proud to call themselves Haitian.”

When Dr. Delva first learned of HAS in her public health work, she asked her parents about Hôpital Albert Schweitzer.

“The first thing they said to me was many of their colleagues did their residencies there. No matter where in Haiti a person is from, from the South to the West, they know about the works of HAS.”

In her own experience of visiting HAS, she has been struck by the beauty of the campus, but also the hospital’s impact:

“You cannot walk on those grounds and not be changed and not be influenced and not feel the power. Health truly is a right and each day HAS ensures that they manifest that right in treating each individual with respect and dignity. HAS presents a model of the ways in which success can be obtained against all odds. The organization has withstood the test of adversity, of natural disasters, of all types of political changes and challenges and still provided quality healthcare, quality education, and quality community service for over 60 years. That, in and of itself, speaks volumes to the importance of the organization and the hospital.”

“Not only are they providing healthcare to those who live in the country but also work opportunity. I’ve met so many Haitians who either work on the campus, work with the physicians, or work in the community to provide health education.”

On the Value of Public Health

Dr. Delva speaks of the ubiquity of public health – according to her, it is everyday life. It is also a guarantor of future success.

“Public health teaches us in a number of ways that – from clean water to appropriate agriculture and food, from education to exercise and being able to walk a couple of blocks each day – these are all things that play fundamental roles in the health and wellbeing of a people, of a country, of a nation.”

Why Haiti is a Country to Celebrate:

“The way in which Haiti is portrayed in the media– it tries on your spirit if you’re Haitian-American. I don’t want people to think about Haiti as a cause to invest in or a country to pity or to feel that we must go in and save. Rather, think of it as a country that led a revolution; won its independence; helped others win their independence; has a brightness and richness of color, culture, and warmth; and has a resilient spirit that it will survive against all odds. Yes, we have struggles; yes, we have challenges, but know that within all of that are joyous and free-spirited, dedicated and resilient people.”

Good health enables each of us to be our very best selves – and collectively, our strongest community. Join us in celebrating Haiti’s vibrancy and its promising future by giving a gift today.