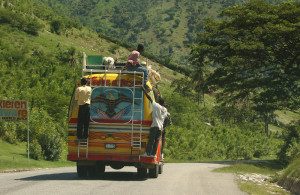 According to the World Health Organization, over 1.2 million people die each year due to road traffic accidents—over 90 percent of which occur in low and middle-income countries. As the poorest country in the Western Hemisphere, Haiti lacks the resources necessary to build and support a modern public transportation system. Although most of the debris has been cleared from the main roads in Haiti since the devastation that occurred after the 7.0 magnitude earthquake in 2010, transportation issues continue to disrupt the region.

The majority of roads in Haiti are poorly maintained. In rural areas such as the Artibonite Valley where Hôpital Albert Schweitzer (HAS) works, narrow dirt lanes more closely resemble footpaths. Automobiles and motorcycles traverse overcrowded streets alongside vulnerable pedestrians at all hours of the day. Public transportation in Haiti consists mostly of open vehicles known as “tap-taps.” These vehicles are particularly hazardous due to the danger of passenger ejection. In rural and mountainous areas, there are few guardrails, traffic signs, or road markings, and little to no vehicle or road lighting. Poor vehicle maintenance and mechanical failures also contribute to traffic accidents.

Road traffic injuries place a significant strain on an already burdened healthcare system. Emergency medicine and adequate surgical and rehabilitation services are necessary in order to properly care for these patients. The issue of road safety has become so significant that the World Health Organization and other prominent international organizations have placed increasing emphasis on the state of road safety worldwide.

Trauma-related injuries have both short- and long- term consequences for the individual and his or her family. Wisler is one such patient who received care at HAS recently after a motorcycle accident, which broke his tibia (left lower leg). It required a two-week stay in the hospital, including orthopedic surgery to realign and immobilize the fractured bone, as well as physical therapy consultations for two months following the procedure. His injury caused him temporary disability and required him to stop work for weeks. Wisler is recovering nicely today thanks to the attentive care he received.

HAS has served hundreds of patients like Wisler. Up to 40 percent of all traumatic injuries that present at HAS are due to road traffic accidents – and trauma care represents the majority of our surgical program. Our team of two major surgeons and seventeen nurses perform nearly 2,000 life-or-limb saving surgeries each year — this includes approximately 300 orthopedic and 500 wound repair procedures. While our surgical team has an excellent success rate, they are still operating without the help of a full-time orthopedic surgeon. With the number of traumatic injuries due to road traffic accidents on the rise, our surgical team is in need of additional support.