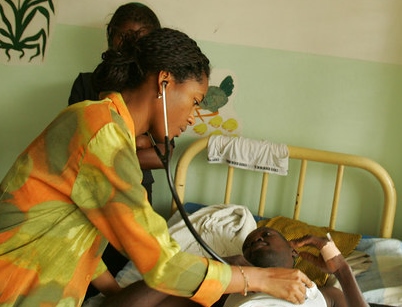 When thinking of healthcare in Haiti, what comes to mind? Many think of malnutrition and infectious diseases like cholera. While these are undeniable risks in public health in Haiti and throughout other low-income countries, the breadth of health problems that people in these countries are facing is widening.

On the other side of the spectrum from infectious diseases and malnutrition are non-communicable diseases (NCDs), which represent an increasingly high percentage of the burden of disease in countries such as Haiti – though many think of them only in a high-income country context. NCDs include cancers, cardiovascular disease including hypertension, diabetes, and obesity-related conditions. When the two extremes of infectious diseases and NCDs coexist, the result is the “double burden.” Doctors and healthcare providers in Haiti not only face the challenges associated with delivering care for the traditional “diseases of poverty,” but also see a growing number of cases of diseases once associated almost entirely with high-income countries.

The reasons for the increased prevalence of NCDs in low-income countries are several. First, as infectious diseases are successfully treated, people can live longer and are more likely to acquire diseases such as cancer during their lifetime. Indeed, though still low by international standards, life expectancy in Haiti has increased in recent years, from 49 years in 2000 to 62 today. Additionally, changes in lifestyles occurring globally, including increasingly sedentary lifestyles and poor nutrition due to the globalization of the food market, contribute to the rise in NCDs. Haiti now imports a significant amount of food from countries like the Dominican Republic and the United States, meaning that fewer people are farming for a living, and more are consuming processed foods.

It may seem that infectious diseases have a more urgent need for care than NCDs. However, many NCDs have complications that can lead to serious disability or can be fatal in the case of renal failure or a heart attack – conditions that we see frequently at HAS as of late. Additionally, these conditions have serious impacts on economic development: about three-quarters of the NCD disability burden in low and middle income countries occurs in people between the ages of 15 and 69 – the majority of the workforce.

Due to the relatively new presence of many of these conditions in low-income countries like Haiti, many people are unaware of the severity of NCDs, or may be unaware of the diseases themselves.

Reginald, a regular HAS diabetic patient, used to be one of them. Like many in his community, Reginald only became aware of his diabetes when he began experiencing its painful complications. He arrived at HAS with an infection and, due to his diabetes, underwent a below-the-knee amputation. However, upon learning about his condition, Reginald and his doctors at HAS were able to to get his diabetes under control and avoid further complications through regular consultations and insulin treatment.

At HAS, we know the importance of treating both infectious diseases and NCDs, and see the need for increased education and awareness in our community in order to prevent them from occurring as much as possible. To assist and educate our patients, we have community health workers, a staff of nurses from our community health centers and mobile clinics, and a specialized diabetes and hypertension education nurse who works in the main HAS hospital. With these efforts and others, HAS is prepared to take on the challenge of managing the double burden of disease.