January 14 is the birthday of Albert Schweitzer.

Born in 1875 in Alsace, he studied philosophy, music, and at the age of 30 decided to become a physician to serve the people in Africa.  He lived in Lambaréné, on the edge of the Ogooué River, caring for the patients who mostly came by canoes. He was awarded the Nobel Peace Prize in 1952 for his humanitarian service. He used the money from the prize to build a space for Leprosy patients.

Larry Mellon, a rancher in Arizona, read about Schweitzer’s work in an October 1947 LIFE Magazine, which told of his life-long humanitarian work in Africa.

Larry decided the he would like to return to undergraduate studies, enter medical school and devote the rest of his life to caring for those needing medical care.  When he told his wife, Gwen Grant Mellon, of his idea, she was fully supportive.

They moved to New Orleans, Louisiana with her three children where he completed his undergraduate classes and Tulane Medical School in 1953.  While at Medical School he met a physician from Haiti who suggested that he visit Haiti. The family spent the summer of 1952 in Haiti where they found the abandoned Standard Fruit Banana Plantation, which was ceded to him by the Haitian Government to build a hospital.

The doors to Hôpital Albert Schweitzer Haiti were opened on Dr. Mellon’s 45th birthday, June 26, 1956.  The doors to the hospital have been open 24 hours a day ever since.

Today, January 14th, we celebrate the life of Albert Schweitzer, who inspired Dr. Mellon to follow in his footsteps. Dr. and Mrs. Mellon followed the example of Dr. Schweitzer’s life and also made sure that the HAS staff knew about Dr. Schweitzer’s philosophy: 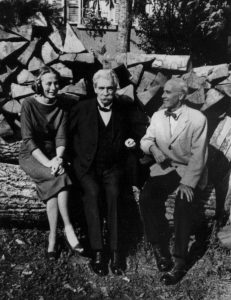