Last week, the World Health Organization declared the epidemic of birth defects associated with Zika virus to be a public health emergency of international concern. At HAS, we have had several suspected cases of Zika in the past weeks, and we are taking proactive steps to prevent its spread and care for patients who are sickened by Zika.

The Zika virus is a mosquito-transmitted infection related to dengue that began to spread in the Western Hemisphere last May, when an outbreak occurred in Brazil. When symptoms are present, it can manifest as a fever, rash, joint pain and conjunctivitis.

HAS has many years of experience addressing mosquito-borne illnesses.  We treat many patients each year for dengue, malaria, and chikungunya. Unlike these illnesses, Zika can manifest with mild symptoms, and sometimes causes no noticeable symptoms at all. Zika’s danger lies in its potential link to microcephaly in newborns, a birth defect causing babies to be born with an abnormally small head and brain damage.

As there is currently no vaccine, or definitive “cure” for the disease, most of our efforts are focused on prevention through education.    All doctors and staff have been educated about the signs and symptoms of Zika, and are informing patients – particularly in our community health centers, where many patients seek pre-natal and reproductive health services. 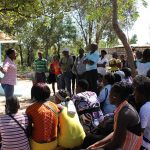 Additionally, our staff have been proactive in community outreach efforts. HAS has collaborated with traditional birth attendants for a number of years to help improve maternal survival and birth outcomes, and we have included education on Zika in their briefings to ensure they are all aware of the symptoms.  From these conversations, traditional birth attendants have learned to refer any pregnant women who have had any related symptoms to the hospital, and to educate community members about how they can personally prevent mosquito bites.  HAS Medical Director Dr. Herriot Sannon and HAS Nursing Director Anne Marie Ferna Victor have been featured on local radio stations to inform listeners about Zika, and to warn them to take personal precautions, such as getting rid of standing water in and around their homes. Mosquito prevention is difficult without massive participation, so many of our doctors and nurses have spoken in their local churches to reach as many people as possible.

“Well-established healthcare systems, such as HAS, are in a strong position to help curb the impact of diseases like Zika,” said Scott Dowell, deputy director for surveillance and epidemiology at the Bill and Melinda Gates Foundation and an HAS Board member.  “The HAS network of community health workers is a powerful asset for community education and disease prevention.”

We are not seeing extreme increases in hospital admission as we did with the recent chikungunya outbreak, likely because Zika symptoms are typically mild. It is currently the dry season, which means mosquitos are also not breeding as much as they will be during the rainy season, which will begin in March or April. In spite of this, we remain vigilant and are preparing for an even wider spread of the virus.

How can you help? If you would like to contribute to our Zika prevention efforts, the best way to help is with unrestricted gifts that can support a number of these efforts. Your gift could support: