It was on an evening in the spring of 2013, when Ursula and Hermann Thomi of Bern, Switzerland watched the end of a Swiss television report on some Haitian earthquake patients, amputees, who were being treated at HAS and receiving prostheses. The report showed life in Haiti after the disaster and how the people at HAS still are working to support the victims. Ursula and Hermann decided immediately that they would like to support a project at HAS and wrote a letter to Dr. Rolf Maibach, HAS Board member and director of the Swiss Partnership HAS Haiti. A few days later Ursula and Hermann met with Raphaela and Rolf Maibach and were impressed by a presentation of HAS. But they were also surprised by the tremendous cost of energy at the hospital: US$ 400,000 every year for electricity production from diesel generators! That money should be used for healthcare, Hermann Thomi said, and so began our HAS SOLAR PROJECT. Haiti is very sunny, but the power supply in most places is still largely provided by expensive and environmentally harmful diesel generators, simply because the grid infrastructure is lacking. The Thomis were ready to change that at HAS and generously donated 500,000 Swiss Francs (approx. 520,000 US$) to the SWISS PARTNERSHIP HAS HAITI (SPHASH) (former BUENDNER PARTNERSHIP) for this project.

We were happy to have Swiss solar engineer Marc Baetschmann, dipl. Ing. ETH, volunteer for the planning of this exciting, but very complex and demanding project. Marc came to HAS in February 2014 and developed together with PPD Director Jimmie Tinsley and Rolf Maibach the first technical concept for a big solar project, after first visiting three Haitian hospitals with solar power systems and careful inspection of the hospital roofs at HAS. Thanks to Louis Martin, HAS CEO, who opened a connection to CELESTICA Canada, a world renowned electronic engineering company, we received 800 “B” solar panels at no cost. SPHASH paid for transport of the panels and additional material, with everything arriving on 4 November 2014. For the following six weeks local Haitian technicians under the guidance of Hannes Schroeder, a solar engineer from “Engineers Without Borders” performed the installation, cabling and connections of the 800 panels on selected roofs of the hospital. Ten large SMA solar inverters were installed in a separate inverter room to transform the DC power of the photovoltaic (PV) system to AC power, as required for supplying the hospital and campus. However, our engineers also realized that the old central electric switchboard was not sufficient and not safe for this new and complex electric system. So Jimmie Tinsley developed a plan for a larger switchboard, which was then constructed by Schneider in Pittsburgh. In the meantime a security fence was installed around the hospital to protect the solar panels.

Deschapelles does not have a public electric grid, where we would have been able to connect and export the solar power, as is commonly done with rooftop solar. Instead, we had to find an independent system for stabilizing and regulating the power supply, and for storing the excess solar power. QINOUS, a young company, based in Berlin/Germany, and consisting of highly experienced engineers, was able to present a hybrid solution based around a compact lithium battery system. This would then provide for daytime grid stabilization, allowing total penetration from the roof top solar power system and complete shutdown of diesel generators during the day. Evaluation of this system in Berlin and later in Switzerland by Marc Baetschmann and us was positive and QINOUS began work in March 2015, followed by a site inspection trip to Haiti in June 2015. 1024 lithium battery cells were shipped from South Korea in an air-conditioned container and the prefabricated technical container for the balance of the battery system was shipped from Germany, with both containers arriving on time in Haiti.

Four QINOUS engineers, led by Steffen Heinrich and Dave Dunnett, arrived early in October 2015 for the installation of the entire hybrid system, together with our technical leader, Marc Baetschmann. It was especially helpful that the Qinous engineers installed the system together with our on-site Haitian team under the lead of Jimmie Tinsley, and that they thoroughly trained the staff before entering the system into service. This guaranteed that the local team possesses the necessary know-how to ensure smooth operation of the system.

Cooperation between the European and Haitian team was just marvelous and we were all very much impressed by the enthusiasm and quick learning of the Haitian technicians to operate this new and complex energy system. Sunday, 25 October was the critical and final happy day, when the generators were switched off for the first time and the hospital and campus were supplied entirely from solar energy (with support from the batteries) for several hours during daytime. And additionally the “Silent Hospital” was a new and pleasant experience for all of us.

Between October 2015 and mid-February 2016 the solar power system was in daily operation under manual control, until the retrofit of the diesel generators could be carried out by the Haitian generator company, with assistance from the QINOUS engineers and the HAS local team. Since February 2016 the entire power system works now as an automatic hybrid network completely independently. The battery system automatically shuts off the generators during the day when there is enough solar power available and it brings the generators back online in the evening once the batteries are discharged. The “grid-forming” capability of the battery system is what allows us to turn the diesel generators off during the day, and is what automatically balances the solar output with the total demand from the hospital and campus. The diesel generators come online only when the sun stops shining and the batteries have discharged. An integrated online monitoring power system enables the hospital’s power supply to be constantly observed and optimized. From everywhere in the world, and especially from QINOUS headquarter in Berlin, the gathered data can be analyzed in order to ensure an efficient supply and determine any further development of the technology needed. Again, cooperation between the German and Swiss engineers and the PPD team at HAS was terrific. Even after departure of the European engineers, we have been able to continually optimize the system, thanks to efficient training of the local team and the online monitoring system. European energy trade press reported widely about the new HAS Solar Power System and even Haitian journal “Haiti Libre” published a report: http://www.haitilibre.com/en/news-16622-haiti-environment-the-albert-schweitzer-hospital-converts-to-solar-power.html

Currently the PV system has a peak output of 200 kW, while the battery system has an energetic capacity of 225 kWh and is able to deliver an output power of 200kW. As it stands, we are estimating that HAS will save between 20 and 30 % of diesel costs, amounting to roughly US$ 100,000 per year and 200 tons of yearly CO2 output! And in addition HAS will also save money by reducing the costs for generator service. Hopefully this is not the end of the story: SWISS PARTNERSHIP HAS HAITI (SPHASH) plans to double the amount of solar panels and the amount of batteries after another fund raising tour with Swiss and other donors and possibly by Swiss governmental organizations. Therefore our next goal is to achieve a saving of more than 60% of the diesel costs and CO2 output! 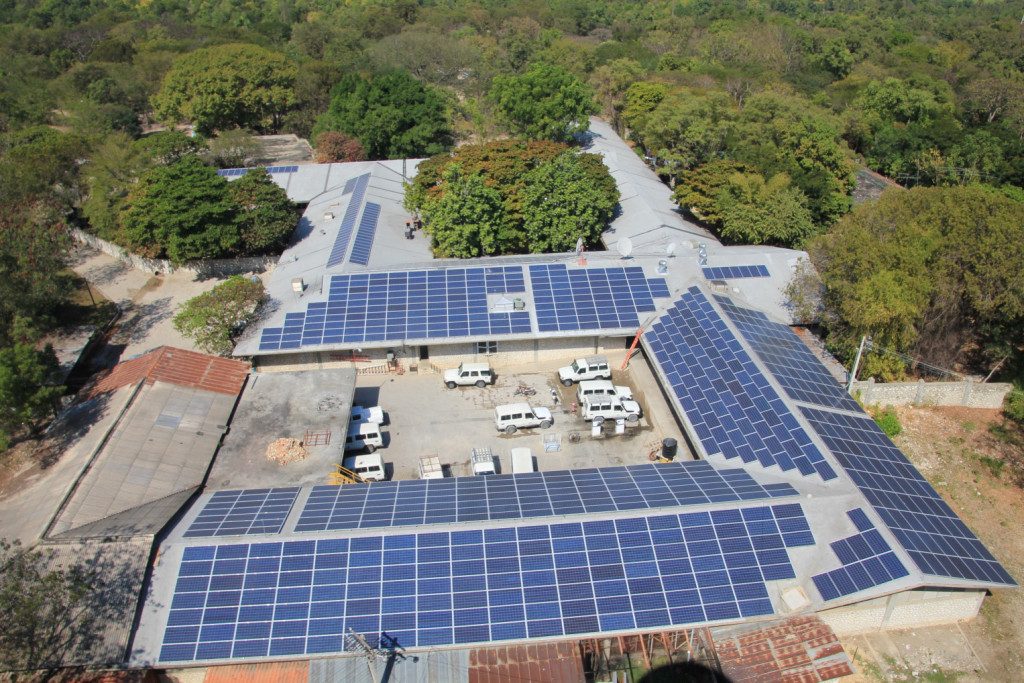 You may see more pictures on the Swiss Partnership HAS Haiti homepage: http://www.hopitalalbertschweitzer.org/galerie/fotos.html#solar and an English spoken video Here.