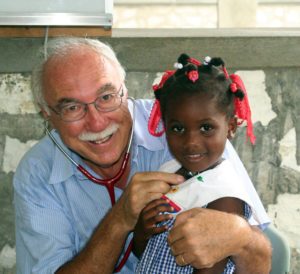 Dr. Maibach, a Swiss pediatrician, first heard of HAS in 1995 when he met Gwen Grant Mellon in Switzerland. Mrs. Mellon invited Dr. Maibach and his wife Raphaela, a lab technician, to travel to HAS to volunteer their services in 1996, a practice they continued annually for the next decade.

In 1997 Dr. Maibach founded the Schweizer Partnerschaft HAS Haiti (SPHASH), a partner organization based in Switzerland which provides generous funding and volunteer support to this day. In addition to his volunteer support, Dr. Maibach served as HAS’ Medical Director from 2008 to 2010.  He and Raphaela have also been essential in obtaining funding for and organizing the process to move HAS’ power supply from being provided largely by expensive and environmentally harmful diesel generators to mostly by solar energy.

On the changes that have occurred since he first arrived in Deschapelles, Dr. Maibach says:

“At the beginning most of the doctors and the nursing staff came from abroad. It was a Haitian-American hospital where mostly English was spoken. That’s all changed today. It is now a Haitian-international hospital. We have employed increasing numbers of Haitians and implemented French as the common language. From my point of view this was an important development in helping the Haitians build confidence in us in the long run.”

Dr. Maibach has always operated in the spirit of Dr. Schweitzer’s teachings, treating all patients with respect and communicating with them at “eye level.” He attributes the success of the hospital to this blend of respectful health care and team collaboration. His favorite Kreyol saying is men anpil chay pa lou, many hands make light work. We are grateful for Dr. Maibach’s service as a pediatrician on the ground for almost a quarter century and for his service on the HAS Board over the last 19 years.