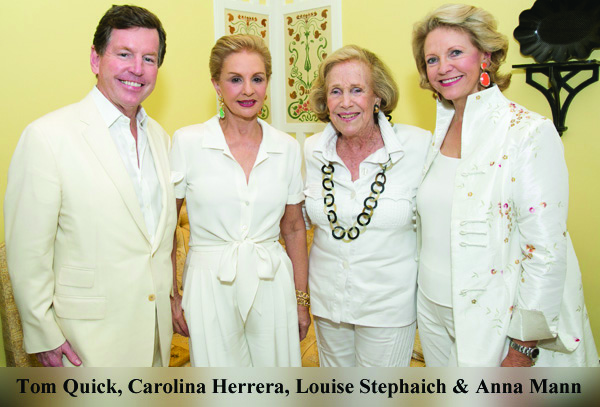 The annual HAS fundraiser in Palm Beach, Florida, raised a record $700,000 this year.

Internationally renowned designer and special guest Carolina Herrera accepted Le Grand Chapeau award at the April 2 event for her dedication to improving the health of children.

“It is a great honor to be connected to [HAS] in Haiti, an institution whose doors have been open for nearly 60 years, and which has been a source of aid to Haiti,” said Mrs. Herrera. “It is wonderful to be part of this evening, which is such a great, glamorous success.”

Co-chaired by HAS Board members Louise Stephaich and Anna Murdoch-Mann with long-time HAS donor Tom Quick, the sold-out White Hot Night-themed celebration at the Flagler Museum was sponsored by Bacardi USA, News Corp., and 21st Century Fox.

The event’s live auction featured unique experiences, including tickets to the grand finale of TV series American Idol, an African safari, and a week’s stay for 24 at a grand manor in the English countryside.

“We are very grateful to all who supported this amazing event,” said HAS Board Chair John Walton. “The co- chairs are to be congratulated for this extraordinary success. The event helped HAS raise significant support for the hospital while building awareness of our cause. It was a fantastic opportunity to tell our story.”